Caspases (cysteine-aspartic proteases or cysteine-dependent aspartate-directed proteases) are a family of protease enzymes whose functions are intimately linked with the processes of apoptosis (programmed cell death), necrosis, and pyroptosis (inflammation). AAT Bioquest offers a plethora of reagents and kits for measuring caspase activity in real-time enzyme kinetic and end-point assay formats.

Caspases are cytosolic aspartate-specific cysteine proteases that serve as the primary mediators of apoptosis. A variety of receptors, such as the TNF-α receptor, FasL receptor, TLR, and death receptors, and the Bcl-2 and inhibitor of apoptosis (IAP) protein families, participate and regulate this caspase-dependent apoptosis pathway. Once activated by an upstream stimulus (extrinsically or intrinsically), caspases execute the proteolysis of downstream protein substrates, triggering a 'cascade' of events that lead to cell disassembly, death, and phagocytosis and removal of cellular debris.

Apoptotic initiator caspases such as caspase-2, -8, -9, and -10 can initiate the caspase activation cascade. Caspase-8 is essential for the formation of the death-inducing signaling complex (DISC). When activated, caspase-8 activates downstream effector caspases (e.g., caspase 3) and mediates the release of cytochrome c from the mitochondria. Caspase-8 has proven to show relatively high substrate selectivity to the IETD peptide sequence. Apoptotic effector caspases such as caspase-3, -6, and -7 may not be responsible for initiating the cascading pathway. Still, when activated, they play an integral role in the intermediate and later steps of the cascade. Caspase-3 (CPP32/apopain) is a key effector as it amplifies the signal from an initiator caspases and signifies the full commitment to cellular disassembly. In addition to cleaving other caspases in the enzyme cascade, caspase 3 has been shown to cleave poly(ADP-ribose) polymerase (PARP), DNA-dependent protein kinase Cδ and actin. Detection of activated caspase-3 is carried out using a DEVD peptide sequence which is selective for caspase-3 and proven successful at developing caspase-3 substrates.

Chromogenic caspase substrates comprise a signal generating motif, such as the highly colored chromophore pNA (para-nitroaniline or 4-nitroaniline) linked to a caspase recognition sequence which is monitored colorimetrically at 405 nm using either an absorbance microplate reader or a spectrophotometer.

Figure 2. Detection of Caspase Activities in Jurkat cells. Jurkat cells were seeded on the same day at 200,000 cells/well in a Costar black wall/clear bottom 96-well plate. The cells were treated with staurosporine at the final concentration of 1 mM for 4 hours (Red Bar), while the untreated cells were used as control (Blue Bar). The single-caspase assay loading solution (100 µL/well) was added (in #1 for caspase 3/7, #2 for caspase 8 or #3 for caspase 9), or Triple-caspase assay loading solution (#4 for caspase 3/7, 8, and 9 together) was added and incubated at room temperature for 1 hour. The fluorescence intensity was measured with a FlexStation fluorescence microplate reader at the indicated wavelength. The caspase 3/7, 8, and 9 activities can be detected in a single assay without interferences from other caspases.

The Amplite™ Caspase 3/7 Activity Assay Kit provides a simple and robust method to measure caspase 3 and 7 in cell extracts and purified enzyme preparations. The assays use substrate containing a DEVD recognition sequence specific for caspase 3/7—conjugation of the DEVD recognition sequence masks the signal output of the attached fluorophore or chromophore. In the presence of caspase 3/7, the fluorophore or chromophore is cleaved from the DEVD sequence and free to produce either a bright fluorescence or colored signal indicative of apoptosis.

Figure 3. Detection of Caspase 3/7 activity in Jurkat cells with Amplite™ Fluorimetric Caspase 3/7 Assay Kit. Jurkat cells were seeded on the same day at 80,000 cells/well/90 µL in a Costar black wall/clear bottom 96-well plate. The cells were treated with or without 20 µM of camptothecin for 5 hours and with or without 5 µM of the caspase inhibitor AC-DEVD-CHO for 10 minutes. The caspase 3/7 assay solution (100 µL/well) was added and incubated at room temperature for 1 hour. The fluorescence intensity was measured at Ex/Em = 350/450 nm.

In apoptosis, one of the key events is the activation of caspases, which is important for the initiation of apoptosis. Cell Meter™ Live Cell Caspase Binding Kits use fluorescent cell-permeable and nontoxic indicators to detect caspases 1, 2, 3/7, 6, 8, 9, 10, and 13 activities. Once bound to caspases, the fluorescent reagents are retained inside the cell. The binding event prevents the caspases from further catalysis but will not stop apoptosis from proceeding. The caspase binding kits are applicable for fluorescence microscope, flow cytometer, and fluorescence microplate reader. The kits provide all the essential components with an optimized assay protocol, as well as a Hoechst dye (Ex/Em = 350/461 nm) for labeling the whole population of cells and a propidium iodide dye (Ex/Em = 535/635) or Nuclear Green™ DCS1 (Assay Kit 20101) for staining necrotic cells. 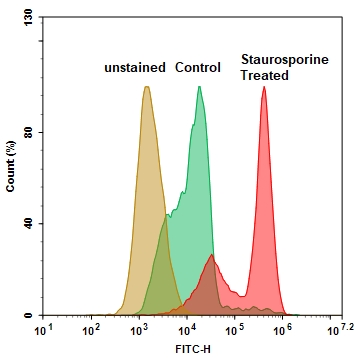 Figure 4. Fluorometric detection of active caspases 3/7 using FAM-DEVD-FMK (Cat No. 20100) in Jurkat cells. The cells were treated with 1 µM staurosporine for 4 hours (Red), while untreated cells were used as a control (Green). Control and treated cells were incubated with FAM-DEVD-FMK for 1 hour at 37 °C and then washed once after stain. Fluorescent intensity was measured with NovoCyte™ 3000 Flow Cytometer FITC channel.

Cell Meter™ Live Cell Caspase 3/7 and Phosphatidylserine Detection Kit is designed to detect apoptosis by simultaneously monitoring Caspase 3/7 and annexin V activities in mammalian cells. Annexins are a family of proteins that bind to phospholipid membranes in the presence of calcium. Annexin V is used to detect apoptotic cells that express phosphatidylserine (PS) on the cell surface. The appearance of PS on the cell surface is a universal indicator of the initial/intermediate cell apoptosis stages. Annexin V-dye conjugates monitor cell apoptosis by measuring the translocation of PS. The kit also provides a Hoechst dye for labeling the nucleus of the whole population of the cells and propidium iodide dye for staining necrosis cells.

Figure 5. The fluorescence image analysis indicated increased caspase expression 3/7 (red, stained by TF3-DEVD-FMK) and annexin V (Green, stained by Annexin V-iFluor 488™) in Jurkat cells induced by 1 µM staurosporine for 3 hours. Fluorescence images of the cells (300,000 cells/well) were taken with an Olympus fluorescence microscope through the DAPI, FITC, and TRITC channels. Individual images taken from each channel from the same cell population were merged as shown above. A: Non-induced control cells; B: Double staining of staurosporine-induced cells for caspase 3/7 (red) and Annexin V (green); C: Triple staining of staurosporine-induced cells for caspase 3/7 (red), annexin V (green), and nuclear (blue).