Changes in intracellular levels of Ca+2 ions are the basis for many cellular responses such as receptor signaling to mediating contractile function, apoptosis, and gene transcription. Monitoring intracellular calcium changes is vital for our understanding of signaling and functional pathways in cellular systems and is central to many processes like muscle contraction and synaptic nerve transmission. Traditionally, monitoring Ca+2 involves techniques using imaging, microplate reader with the application of fluorescent dyes in the academic and industrial settings.

Here, in this application note, we compared calcium response using four red fluorescence calcium indicators Calbryte™ 590 AM, Rhod-2 AM, Rhod-3 AM and Rhod-4™ AM to an endogenous G protein coupled receptor P2Y receptor in CHO-K1 cells using ATP as a stimulant. We used FlexStation3 Multi-Mode microplate reader to measure the kinetic response using different doses of ATP on dye stained cells. Unlike Rhod-3, Calbryte™ 590 AM requires less washing and can be used without probenecid an inhibitor of organic-anion transporters. Attributes such as longer retention time and minimal leakage makes Calbryte™ 590 useful for mid/high throughput analysis of intracellular Ca+2 levels in living cells.

Cells were loaded with 5 µM calcium dyes (Calbryte-590 AM, Rhod-2 AM, Rhod-3 AM or Rhod-4 AM) in medium with Pluronic® F-127 (PF-127) and probenecid (PBC) for 60 minutes at 37°C incubator. Dye loading solution was washed off and 200 µL of Hanks and 20 mM Hepes buffer (HH buffer) PBC added into the plate and incubated for 30 minutes at room temperature. Various doses of ATP solutions (5X working solution) was added into the FlexStation3 loading chamber and added to desired wells at 50 µL to achieve indicated final concentrations (0-10 µM, 3X serial dilutions). Background fluorescence was obtained in wells containing unloaded cells in HH buffer with PBC. The assay was also performed in the absence of probenecid as well.

To investigate which red Ca+2 dye performs best in a 96-well plate format assay, CHO-K1 cells were loaded with Calbryte™ 590 AM, Rhod-2 AM, Rhod-3 AM and Rhod-4™ AM and treated with ATP to stimulate P2Y signaling and intracellular changes in Ca+2 levels were monitored. As demonstrated by the figure-1A, Calbryte™ 590 demonstrated highest Signal/Background ratio upon ATP stimulation, followed by Rhod-4™, Rhod-3 and Rhod-2.

The purpose of adding probenecid to the assay is to minimize the dye leakage by inhibition of organic anion transporters. We performed the entire assay in the absence of probenecid and observed that Calbryte™ 590 performs the best without sacrificing the Signal/Background ratio. (Figure 1 and Figure 2). 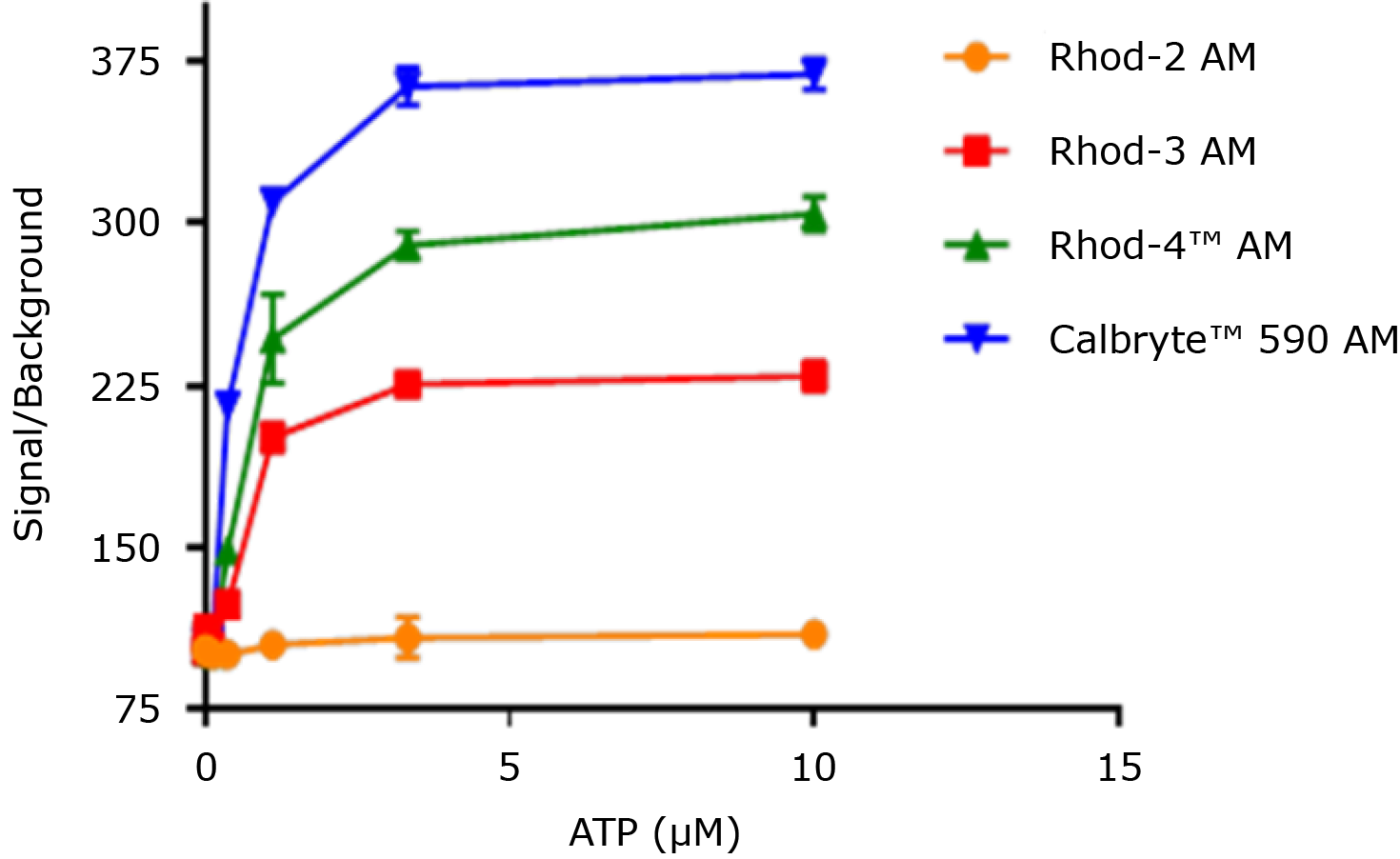 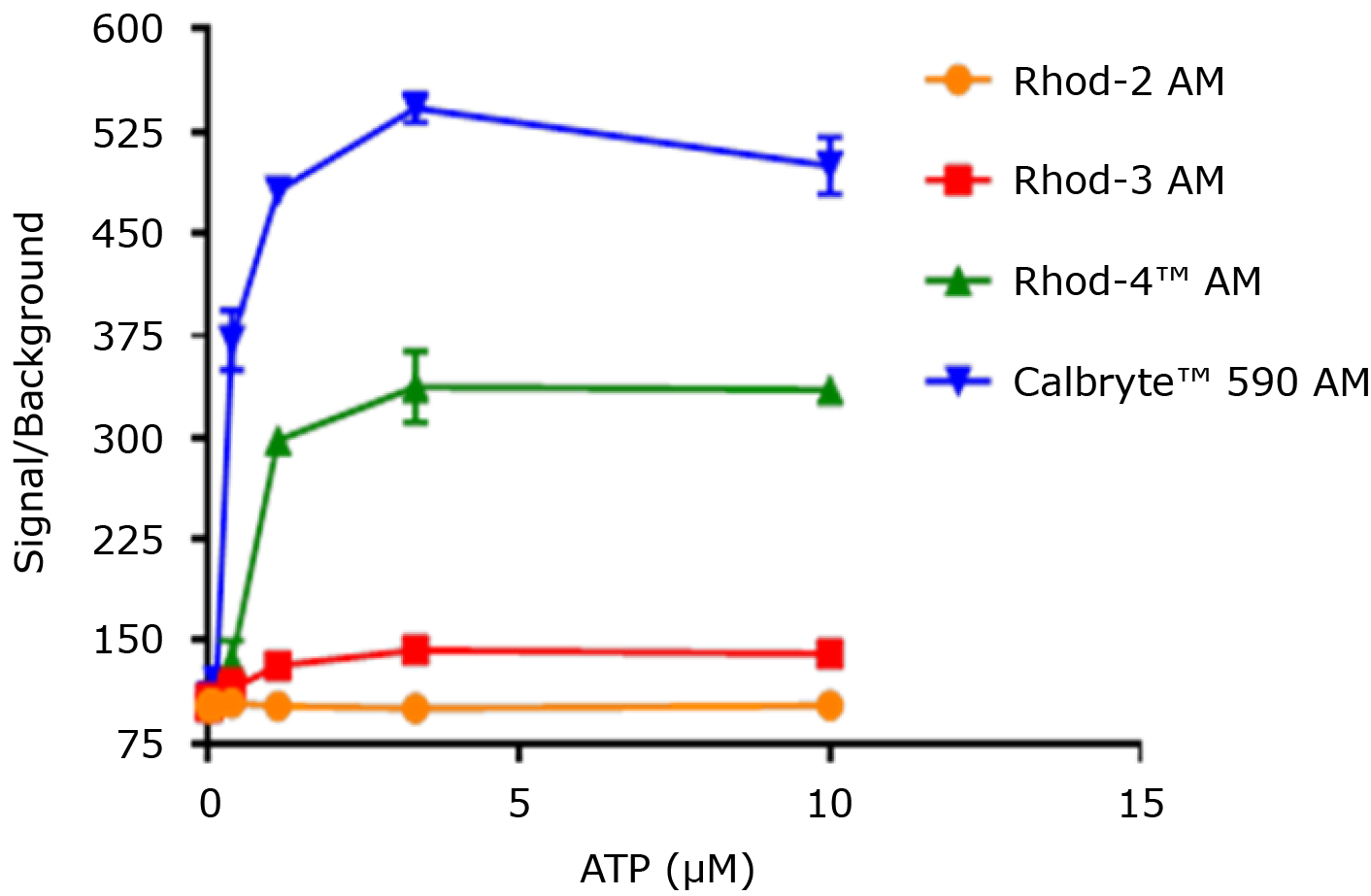 Figure 1. The Ca+2 detection assay was performed in the presence (left) and absence (right) of probenecid and response was measured using FlexStation3 with Ex/Em=540/590 with cutoff 570 nm. 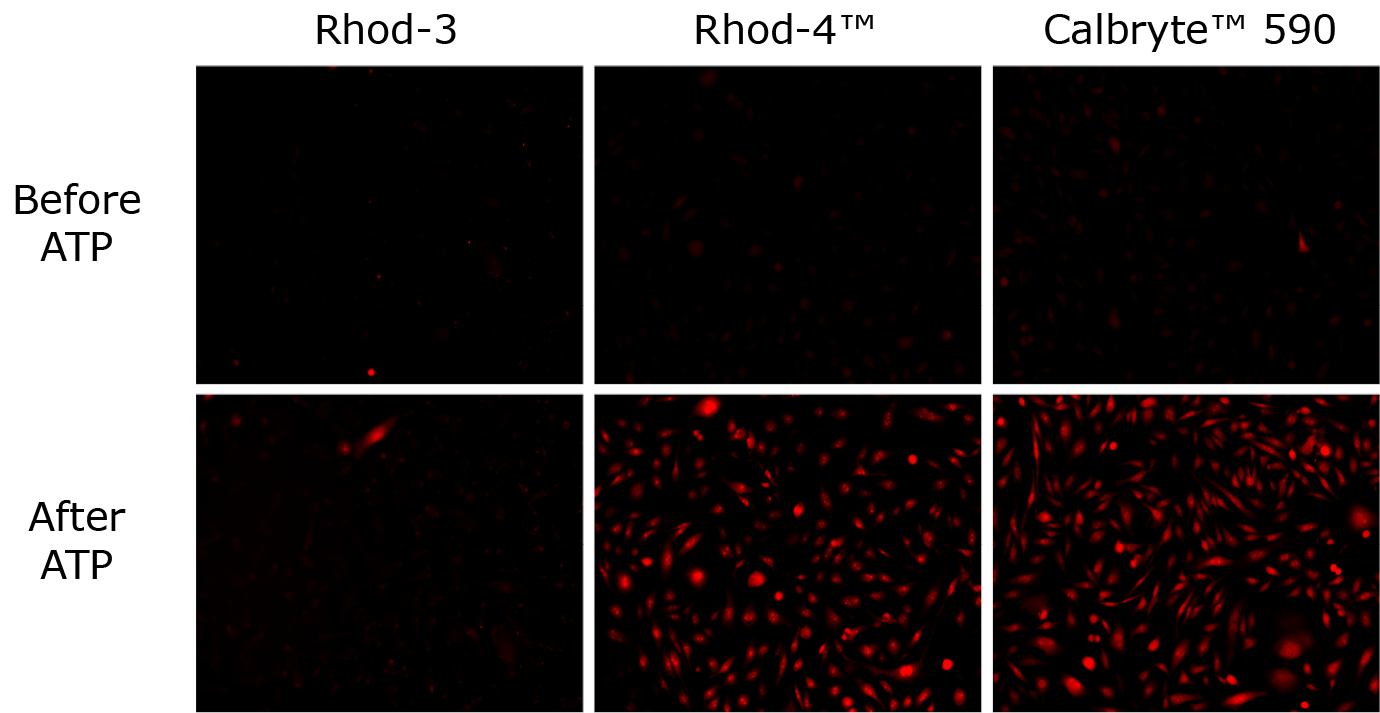 Fluorescent dyes have long been used to monitor Ca+2 levels in living cells by fluorescent imaging as well as microplate reader. Here we have shown that Calbryte™ 590 and Rhod-4™ AM are better options than Rhod-3 AM in investigating P2Y1 mediated Ca+2 signaling in CHO-K1 cells in a 96-well plate format. An attractive quality useful in high throughput analysis of intracellular Ca+2 levels in living cells.