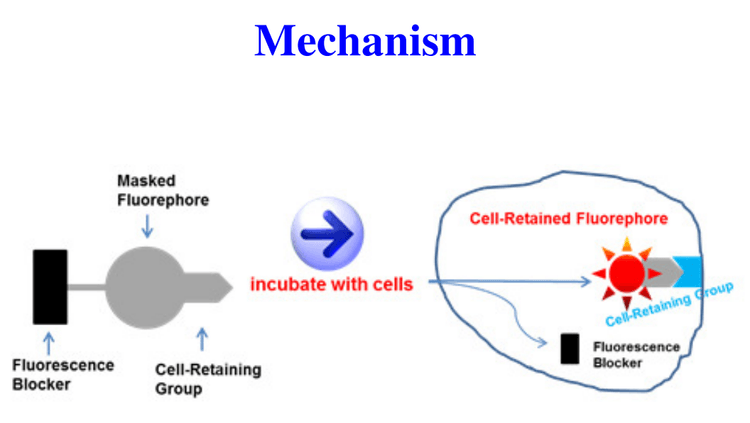 CytoTell™ dye working principle. CytoTell™ dye consists of three components: a). fluorescence blocker; b). masked fuorephore; and c). cellretaining moiety. Upon entering live cells, the fluorescence of CytoTell™ dye is released via the removal of fluorescence blocker, and the released fluorephore is retained in cells through the cell-retaining group.
Flow cytometry combined with fluorescent staining is a powerful tool for monitoring cell proliferation studies. Although CFSE is the most popular fluorescent dye, the identical Ex/Em spectra to GFP or FITC make CFSE impossible to be used for GFP cells or the applications where a FITC-labeled antibody is used. The other disadvantages of CFSE include the high background fluorescence and big gap of fluorescence intensity between 1st and 2nd generation of cells. CFSE staining of lymphocytes cannot be measured directly after the cell labeling because the majority of CFSE initially taken up by the cells is not stably incorporated and is lost within the first few days. Normally CFSE analysis on the FACS is performed on day 2. 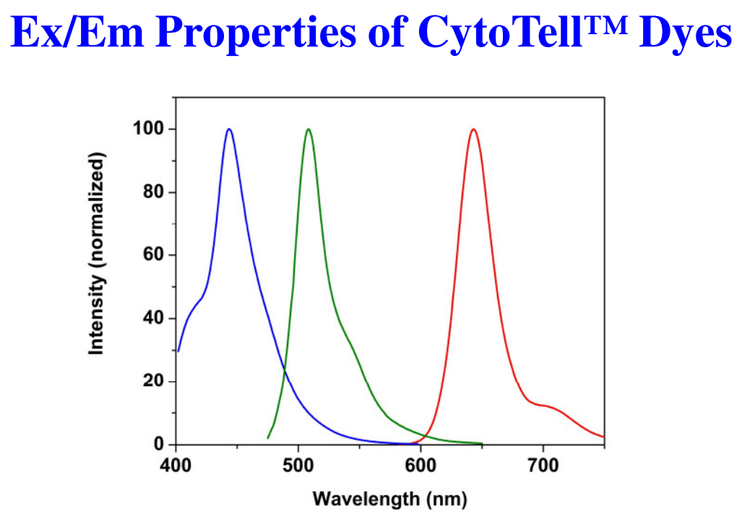 Emission comparison of CytoTell™ Blue (Blue), CytoTell™ Green (Green), and CytoTell™ Red (Red) in PBS buffer (pH 7.2).
AAT Bioquest has developed a new panel of multicolor CytoTell™ dyes for multiplexing cell analysis. We report the functional analysis of cell proliferation using the new panel of CytoTell™ dyes. They are chemically similar to CFSE since they contain both an fluorescence-blocking group and a cell-retaining group. They are well excited at major laser lines like 405, 488 or 633 nm with multicolor emissions. They are much more convenient, stable and sensitive than CFSE with multicolor cell analysis for flow cytometry applications.