Calcium acts as a universal second messenger in a variety of cells. The beginning of life, the act of fertilization, is regulated by Ca2+. Numerous functions of all types of cells are regulated by Ca2+ to a greater or lesser degree. Since the 1920s, scientists have attempted to measure Ca2+, but few were successful due to limited availability of Ca2+ probes. The first reliable measurements of Ca2+ were performed by Ridgway and Ashley by injecting the photoprotein aequorin into the giant muscle fiber of the barnacle. Subsequently, in the 1980s, Tsien and colleagues produced a variety of fluorescent indicators. Among them the fluorescein-based Ca2+ reagents (such as Fluo-3 and Fluo-4) have provided trustworthy methods for measuring Ca2+. Since the development of these Ca2+ probes, investigations of Ca2+ -related intracellular phenomena have skyrocketed.

Since being introduced, Fluo-3 imaging and its analogs (such as Fluo-4) have revealed the spatial dynamics of many elementary processes in Ca2+ signaling. Fluo-3 and Fluo-4 have also been extensively used for flow cytometry and microplate-based (such as FLIPR™) calcium detections. However, the weak signal and harsh dye-loading conditions have limited their applications in some cellular analysis. Our Fluo-8® serial calcium detection reagents have been developed to address these limitations of Fluo-3 and Fluo-4.

The most important properties of Fluo-3 and Fluo-4 in cellular applications are their absorption spectrum compatible with excitation at 488 nm by argon-ion laser sources, and a very large fluorescence intensity increase in response to Ca2+ binding. These two valuable properties have been retained intact with our Fluo-8® Ca2+ detection reagents. The absorption and emission peaks of Fluo-8® reagents are 490 nm and 514 nm, respectively. They can be well excited with an argon ion laser at 488 nm, and their emitted fluorescence (at wavelength 514 nm) increases with increasing Ca2+ . Fluo-8® is determined to undergo a > 200-fold increase in fluorescence upon binding to Ca2+ . Because the range of increase in Ca2+ in many cells after stimulation is generally 5- to10-fold, Fluo-8® is an excellent probe to use with high sensitivity in this region. The Kd of Fluo-8® is estimated to be 389 nM (22°C, pH 7.0–7.5), but this value may be significantly influenced by pH, viscosity, and binding proteins in vivo conditions.

Besides their convenient 488 nm excitation wavelength and large fluorescence enhancement by calcium, Fluo-8® is much brighter in cells than Fluo-3 and Fluo-4 as shown in Figure 1. In addition, Fluo-8® is much more readily loaded into live cells than Fluo-3 and Flu-4, both of which require 37°C for optimal cell loading. Fluo-8® reagents have a less temperature-dependent cell loading property, giving similar results either at room temperature or 37°C. This characteristic makes Fluo-8® more robust for HTS applications.

Compared to Fluo-3 and Fluo-4, our Fluo-8® calcium detection reagents have the following advantages:

Figure 1.  U2OS cells were seeded overnight at 40,000 cells/100 µL/well in a 96-well black wall/clear bottom costar plate. The growth medium was removed, and the cells were incubated with, respectively, 100 µL of Fluo-3 AM, Fluo-4 AM and Fluo-8® AM in HHBS at a concentration of 4 uM in a 37°C, 5% CO2 incubator for 1 hour. The cells were washed twice with 200 µL HHBS, then imaged with a fluorescence microscope (Olympus IX71) using FITC channel.

Use of Fluo-8® AM Esters

GPCR activation can be detected by direct measurement of the receptor mediated cAMP accumulation, or changes in intracellular Ca2+ concentration. GPCR targets that couple via Gq produce an increase in intracellular Ca2+ that can be measured using a combination of Fluo-8® reagents and a fluorescence microplate reader. The fluorescence imaging plate readers (such as, FLIPR™, FDSS or BMG NovoStar™) have a cooled CCD camera imaging system which collects the signal from each well of a microplate (both 96 and 384-well) simultaneously. These plate readers can read at sub-second intervals, which enables the kinetics of the response to be captured, and has an integrated pipettor that may be programmed for successive liquid additions. Besides their robust applications for GPCR targets, our Screen Quest™ Fluo-8 Calcium Assay Kits can be also used for characterizing calcium ion channels and screening calcium ion channel-targeted compounds. 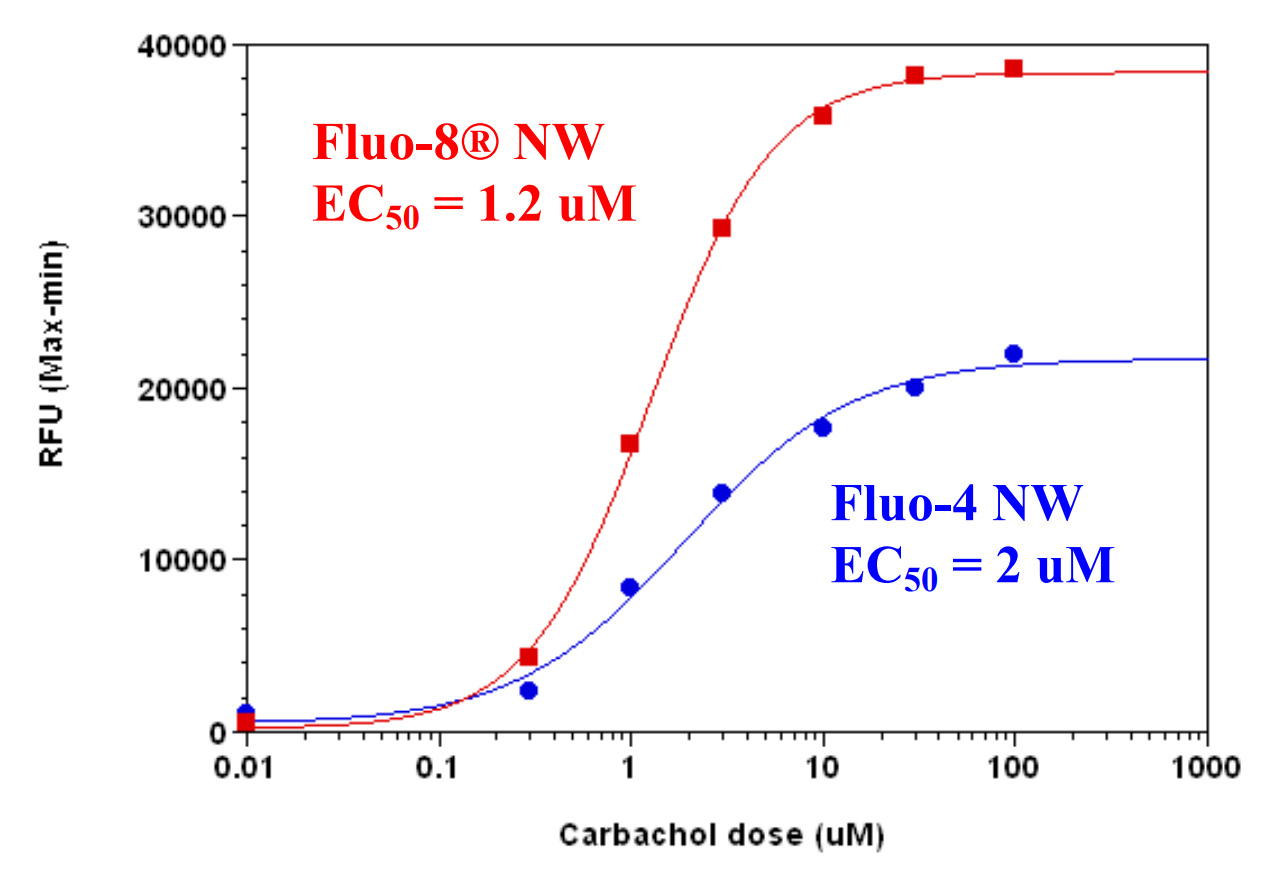 Figure 2.  Carbachol Dose Response was measured in HEK-293 cells with Screen Quest™ Fluo-8 NW Assay kit and Fluo-4 NW Assay Kit. HEK-293 cells were seeded overnight at 40,000 cells/100 µL/well in a 96-well black wall/clear bottom costar plate. The growth medium was removed, and the cells were incubated with, respectively, 100 µL of the Screen Quest™ Fluo 8-NW calcium assay kit and Fluo-4 NW kit (according to the manufacturer’s instructions) for 1 hour at room temperature. Carbachol (25µL/well) was added by NOVOstar (BMG LabTech) to achieve the final indicated concentrations. The EC50 of Fluo-8 NW is about 1.2 uM.

Compared to other commercial calcium assay kits that either based on Fluo-3 or Fluo-4, our Screen Quest™ Calcium Assay Kits have the following advantages for HTS applications:

Use of Fluo-8® Salts

Calcium calibration can be carried out by measuring the fluorescence intensity of the salt form (25 to 50 µM in fluorescence microplate readers) of the indicators in solutions with precisely known free Ca2+ concentrations. Calibration solutions can be used based on 30 mM MOPS EGTA Ca2+ buffer. In general, water contains trace amount of calcium ion. It is highly recommended to use 30 mM MOPS + 100 mM KCl, pH 7.2 as buffer system. One can simply make a 0 and 39 µM calcium stock solutions as listed below, and these 2 solutions are used to make a serial solution of different Ca2+ concentrations

To determine either the free calcium concentration of a solution or the Kd of a single-wavelength calcium indicator, the following equation is used:

The dissociation constant (Kd) is a measure of the affinity of the probe for calcium. The calcium-binding and spectroscopic properties of fluorescent indicators vary quite significantly in cellular environments compared to calibration solutions. In situ response calibrations of intracellular indicators typically yield Kd values significantly higher than in vitro determinations. In situ calibrations are performed by exposing loaded cells to controlled Ca2+ buffers in the presence of ionophores such as A-23187, 4-bromo A-23187 and ionomycin. Alternatively, cell permeabilization agents such as digitonin or Triton® X-100 can be used to expose the indicator to the controlled Ca2+ levels of the extracellular medium. The Kd values of Fluo-8® reagents are listed in Table 1 for your reference.

Because of the importance of Ca2+ in biology, numerous techniques/methods for analyzing the mechanisms of cellular and/or subcellular Ca2+ activity have been established. Unfortunately, however, there is no one best technique/method with which one can measure Ca2+. Although each method for analyzing Ca2+activity has certain advantages over the others, each also suffers drawbacks. With the outstanding properties described above, we believe that Fluo-8® calcium detection reagents and Screen Quest™ Fluo-8NW Calcium Assay Kits provide new powerful tools for intracellular calcium analysis and monitoring in a variety of biological systems in coupling with the rapid advance in fluorescence instrumentation.

As might have been predicted, the interests of many researchers shifted from Ca2+ analysis at the cellular level to the subcellular level. It has been found that Ca2+ is not even distributed throughout the whole cell and that intracellular heterogeneity of Ca2+ (such as Ca2+ waves and Ca2+ sparks) is observed in a variety of cells (e.g., oocyte, heart muscle cell, hepatocyte, and exocrine cell). With the advent of the confocal laser scanning microscope (CLSM) in the 1980s and advanced microplate readers in 2000s (such as FLIPR, FDSS and NOVOStar dedicated for intracellular Ca2+ detections), measurement of intracellular Ca2+ has accelerated significantly. Confocal laser scanning microscopy, and more recently multiphoton microscopy, allows the precise spatial and temporal analysis of intracellular Ca2+ activity at the subcellular level in addition to the measurement of its concentration.