CytoTell™ dye working principle. CytoTell™ dye consists of three components: a) fluorescence blocker; b) masked fuorephore; and c) cell-retaining moiety. Upon entering live cells, the fluorescence of CytoTell™ dye is released via the removal of fluorescence blocker, and the released fluorephore is retained in cells through the cell-retaining group.
Flow cytometry combined with fluorescence staining is a powerful tool to analyze heterogeneous cell populations. Among all the existing fluorescent dyes, CFSE is the preferred cell proliferation indicator that is widely used for live cell analysis. However, there are a few severe problems associated with the use of CFSE for monitoring cell proliferation, these include: CytoTell™ Green is developed to eliminate the above CFSE limitations. CytoTell™ Green can also be used for long term tracking of labeled cells. Analysis using two-parameter plots may provide better resolution of each generation, especially between undivided cells and the first generation. Cells labeled with CytoTell™ Green may be fixed and permeabilized for analysis of intracellular targets using standard formaldehyde-containing fixatives and saponin-based permeabilization buffers. CytoTell™ Green can be excited by the 488 nm blue laser line with the peak emission at 520 nm, which makes it compatible with the FITC filter set. 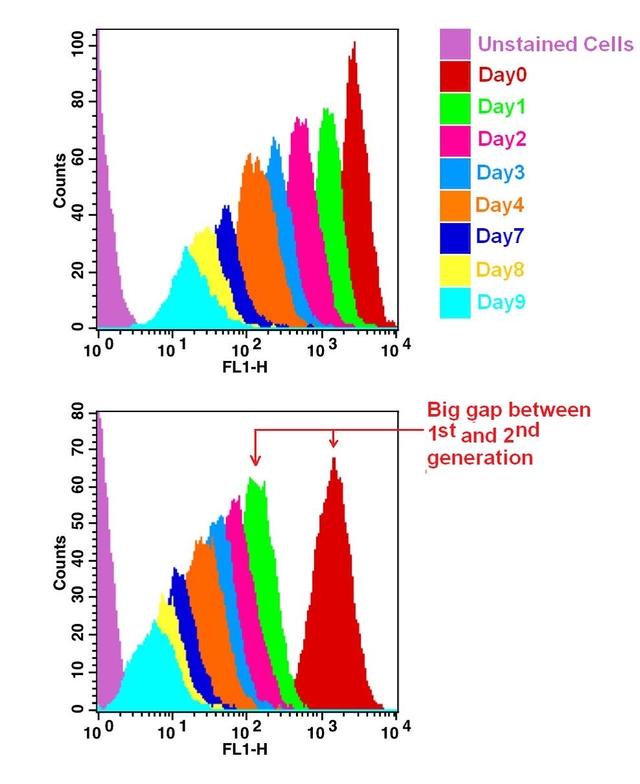 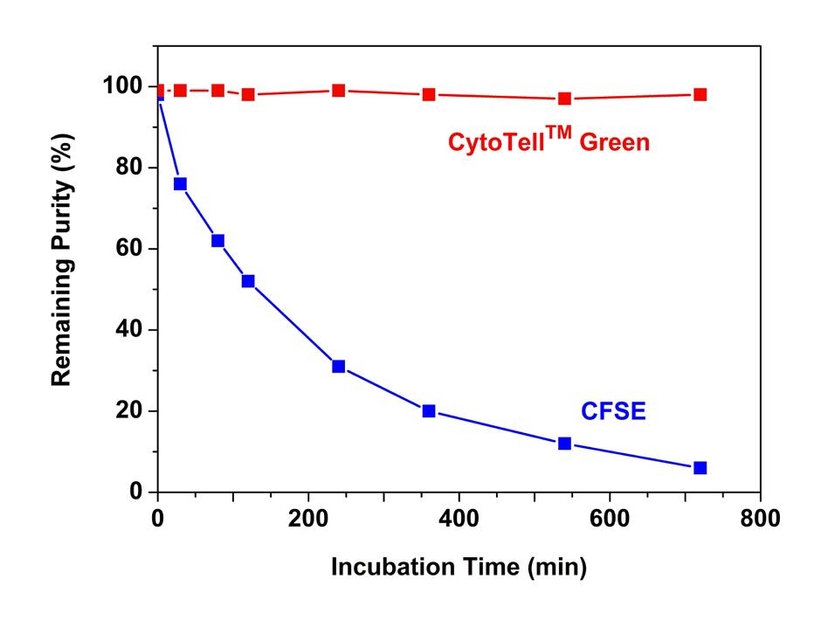 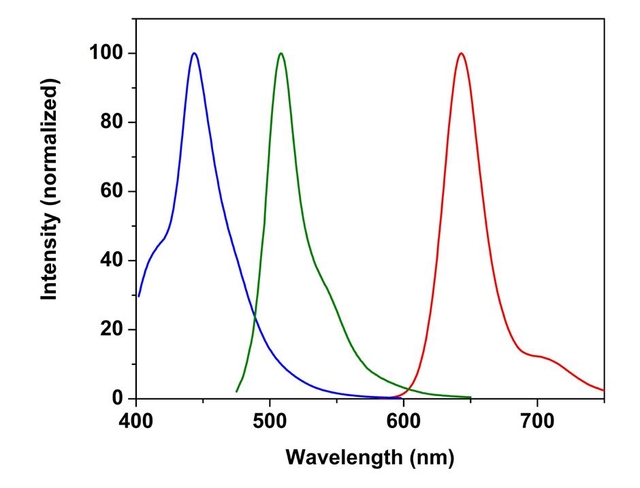 Emission spectral comparison of CytoTell™ Blue (Ex/Em = 403/454 nm), CytoTell™ Green (Ex/Em = 511/525 nm), and CytoTell™ Red (Ex/Em = 628/643 nm) in PBS buffer (pH 7.2).
Flow cytometry combined with fluorescence staining is a powerful tool to analyze heterogeneous cell populations. Among all the existing fluorescent dyes, CFSE is the preferred cell proliferation indicator that is widely used for live cell analysis. However, it is impossible to use CFSE and its fluorescein analogs for GFP-transfected cells or for the applications where a FITC-labeled antibody is used since CFSE and its fluorescein analogs have the excitation and emission spectra almost identical to those of GFP or FITC. CytoTell™ dyes are well excited with major laser lines such as 405 nm, 488 nm or 633 nm laser line with multicolor emissions. They have minimal cytotoxicity and are used for the multicolor applications with either GFP cell lines or FITC-labeled antibodies since they have either excitation or emission spectra distinct from those of fluorescein. CytoTell™ Blue is a blue fluorescent dye that stains cells evenly. It has a peak excitation of 405 nm and can be excited by the 405 nm violet laser line. Its peak emission of 450 nm can be detected with a 450/20 band pass filter (equivalent to Pacific Blue® or BD Horizon® V450), making it compatible with applications that use GFP or FITC antibodies for multicolor cell analysis. 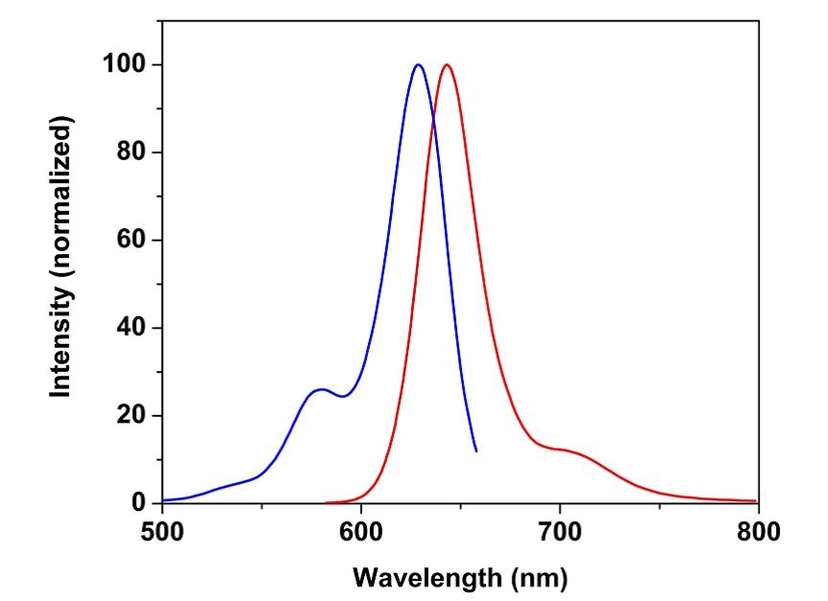 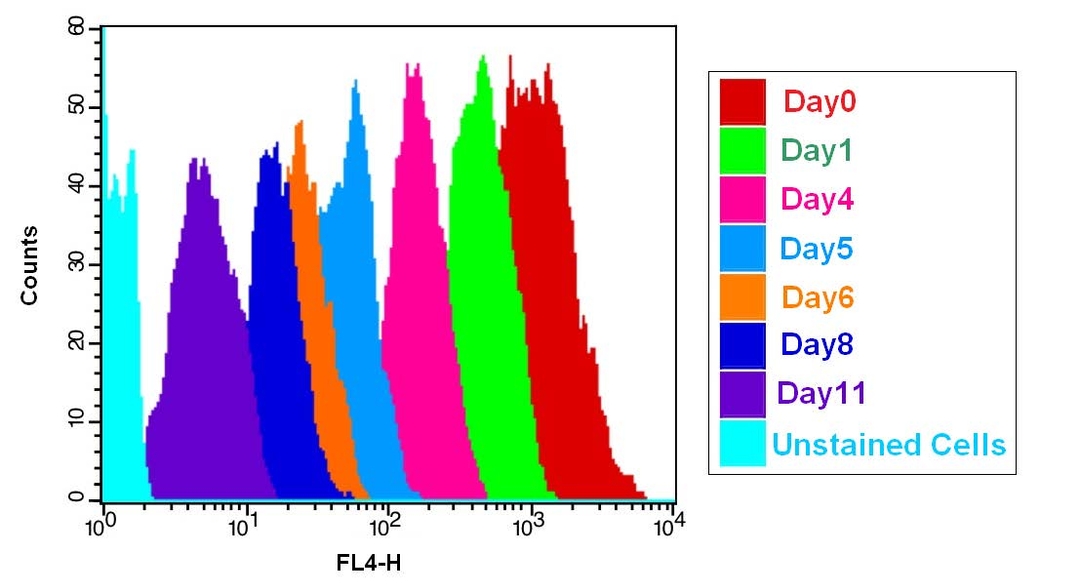