A Practical Guide for the Detection and Analysis of PCR Products

PCR, or polymerase chain reaction, is a core technology used routinely to amplify a specific DNA sequence rapidly. Offering exceptional speed, specificity, and sensitivity as a tool, PCR, and its many adaptations, such as real-time PCR and reverse transcription-PCR, have revolutionized how DNA and RNA species are identified and measured. These techniques have become ubiquitous across all fields of life science. They have been adapted for various detection strategies, including end-point analysis via gel electrophoresis and subsequent DNA staining and quantitative analysis using DNA-binding fluorescent dyes, such as Helixye™ Green and Q4ever™ Green, or hybridization probes, such as TaqMan® probes and Molecular Beacons.

The polymerase chain reaction (PCR) is an analytical technique widely used in molecular biology research to amplify a specific DNA template in vitro rapidly. It enables researchers to generate significant quantities of sample DNA for a wide range of downstream laboratory and clinical applications, including cloning, genotyping, sequencing, mutagenesis, forensics, and the detection of pathogens to diagnose infectious diseases. Since being introduced in 1985, several iterations of the PCR process have been developed, including quantitative PCR (qPCR) for monitoring DNA amplification in real-time and reverse-transcription PCR (RT-PCR) for the detection of RNA, a tool that has become instrumental in viral diagnostics.


The analysis of PCR amplification products (i.e., amplicons) is an essential step in both the quantitative and qualitative assessment of the DNA target that has been amplified. Techniques used to analyze PCR products are generally divided into two distinct groups: 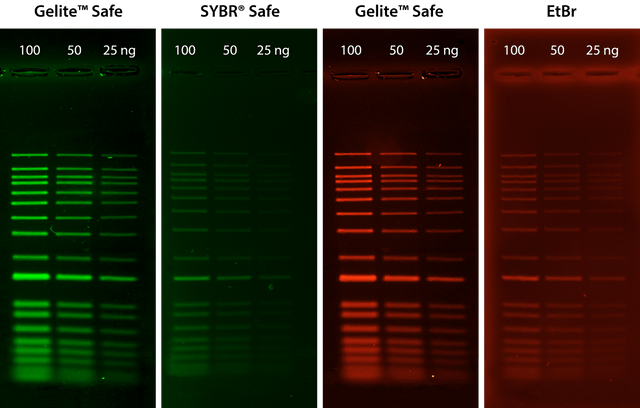 Comparison of DNA detection in 1% agarose gel in TBE buffer using Gelite™ Safe, EtBr, and SYBR® Safe. Two-fold serial dilutions of 1 kb DNA ladder were loaded in amounts of 100 ng, 50 ng, and 25 ng from left to right. Gels were stained for 60 minutes with Gelite™ Safe, EtBr, and SYBR® Safe according to the manufacturer's recommended concentrations and imaged using the ChemiDoc™ Imaging System (Bio-Rad®). Gels were illuminated using a 300 nm transilluminator fitted with GelGreen and GelRed filters.


Intercalating chemical dyes insert between the organic bases within duplex strands of DNA, facilitating a significant fluorescence increase, and as such are valuable for determining DNA concentrations. Many intercalating dyes useful in PCR are currently commercially available, such as ethidium bromide (EtBr) or SYBR® Gold. For quantitative DNA calculations, EtBr can be used to quantify DNA within the concentration range of 20 ng/mL-20 µg/mL, with the relationship between staining intensity and the quantity of DNA being linear. However, the health hazards associated with handling toxic chemicals such as EtBr (e.g., mutagenicity, UV-illumination, etc.) are well recognized, creating a need for better alternatives that minimize health risks and environmental impact. DNA-binding dyes, such as Gelite™ Safe (Cat No. 17700), Helixyte™ Gold (Cat No. 17595), and SYBR® Safe, offer safer alternatives readily detected using the 488 nm argon-ion laser or Blue LED. With Gelite™ Safe, the limit of DNA detection is as little as 0.67 ng DNA.


DNA-binding dyes used for measuring PCR amplification, such as Helixyte™ Green (Cat No. 17592), Q4ever™ Green (Cat No. 17609), and SYBR® Green, bind nonspecifically to double-stranded DNA (dsDNA) (Figure 2). Helixyte™ Green exhibits minimal fluorescence when it is free in solution. Upon binding to DNA, its fluorescence increases up to 1,000-fold. More importantly, the fluorescence output is proportional to the amount of dsDNA present, and increases as more PCR product is produced. Along with target amplification, the fluorescence signal increases exponentially until the DNA primers are depleted.


The benefits of using dsDNA-binding dyes include a simple PCR primer design. The assay requires only two sequence-specific DNA primers. The ability to test multiple genes rapidly, such as in the validation of gene expression data. Lower initial cost and the ability to perform a melt curve analysis to verify amplification reaction specificity. Compared to microarrays, dye-based qPCR is more sensitive at detecting modest changes in expression levels, making it well-suited for investigating small subsets of genes.

The major drawback of DNA-binding dyes is that they are non-specific. Any dsDNA produced from off-target and non-template amplification (NTC) will be observed, including PCR primer-dimers, reducing the accuracy of quantification. Moreover, DNA-binding dyes don't afford multiplexing since the fluorescence signals from different products cannot be distinguished.


Probe-based qPCR is a favored method for measuring transcript abundance. It is one of the most sensitive detection methods that provide an accurate and reproducible analysis. In probe-based qPCR, fluorescently-labeled target-specific probes are used to measure DNA amplification in real-time, offering the least background fluorescence compared to other (dye-based) chemistries. This method benefits from extreme specificity and affords the end-user the opportunity for multiplexing multiple targets in a single reaction. Several platforms are available that use probe-based chemistry to quantitate transcript abundance. Of them, hydrolysis probes, such as TaqMan® probes, and Molecular Beacons are the most widely used.


Hydrolysis assays exploit the 5' exonuclease activity of specific thermostable polymerases such as Taq DNA polymerase. Hydrolysis probes for 5' nuclease assays are synthesized with a fluorescent reporter, such as FAM, HEX, NED, TET, VIC, Cy3, or Tide Fluor™ dyes, covalently attached to the 5' end and a quencher dye, such as DABCYL, TAMRA, BXQ-1, BXQ-2 or Tide Quencher™ dyes, to the 3' end of a sequence-specific oligonucleotide probe, which is complementary to the target DNA sequence. While the probe is intact, the reporter and quencher remain in close proximity to each other, FRET occurs, and consequently, the reporter dye signal is quenched. During PCR cycling, both the primers and probe anneal to the target. As Taq DNA polymerase binds to and extends the primer upstream of the probe, any probe bound to the correct target sequence is hydrolyzed. The reporter dye fragment is released, resulting in a fluorescence signal proportional to the amount of amplicon produced.

Not only does this method benefit from high sensitivity and specificity, but it also allows multiplexing qPCR using probes with different combinations of reporter dyes. This allows for an increase in throughput, meaning multiple samples can be assayed per plate, and consequently, there is a reduction in both sample and reagent usage.


Molecular Beacons are single-stranded nucleic probes held in a hairpin-loop conformation (typically 20 to 40 nucleotides) by a complementary stem sequence of 4 to 6 nucleotides at each terminus. The hairpin-loop comprises of a nucleotide sequence complementary to the template, and the hydrogen-bonded stem sequences allow the 3' quencher to suppress the fluorescence of the 5' reporter when the probe is free in solution. Molecular Beacons hybridization to their specific target sequence causes the hairpin-loop structure to open, displacing the 5' reporter from the 3' quencher. As the quencher and reporter are no longer in proximity, fluorescence emission takes place. Unlike hydrolysis probes, the detection mechanism of Molecular Beacons does not depend on degradation during the reaction. Instead, the measured fluorescence signal is directly proportional to the amount of amplicon produced. Molecular Beacons are highly specific and can be used for multiplexing. More importantly, if the target sequence does not match the beacon sequence exactly, hybridization and fluorescence will not occur—an advantageous characteristic for allelic discrimination experiments.
The main disadvantage of using molecular beacons is that they are challenging to design. The hairpin stem must be strong enough that the molecule will not spontaneously fold into non-hairpin conformations that result in unintended fluorescence. Conversely, the hairpin stem must not be too strong, or the beacon may not properly hybridize to the target.


Scorpion® primers are highly sensitive, sequence-specific probes for qPCR, genotyping, allelic discrimination, and SNP detection. They feature a bi-functional design that combines a target specific PCR primer together with a bi-labeled target specific DNA probing sequence. Like Molecular Beacons, the DNA probing component is a self-complementary sequence labeled with a reporter at the 5' end. However, the internal quencher is directly linked to the 5' end of the PCR primer via a hexathylene glycol (HEG) blocker. This HEG blocker is an essential element of Scorpion® primers as it prevents the polymerase from extending the PCR primer. Following the completion of one PCR cycle, the probe and newly synthesized target region will be attached to the same strand. During subsequent denaturation and annealing, the hair-pin loop unfolds and the specific probe sequence hybridzes to its complement within the extended amplicon, and a signal is observed (Figure 3). This uni-moleculer mechanism increases reaction kinetics, which enables Scorpion® primers to generate fluorescent signals instantaneously without incurring any competing side reactions.

An illustration of the mechanism of action of Scorpion® primers. Scorpion® primers combine a target-specific primer and probe in a single sequence for rapid qPCR quantification (figure made in BioRender).

There are many considerations when selecting a detection strategy for a particular PCR application. While Helixyte™ Green and TaqMan® hydrolysis assays generally work well, there are situations in which the other detection systems might be preferable.