Wheat germ agglutinin selectively binds to N-acetylglucosaminyl (GlcNAc) and N-acetylneuraminic acid (sialic acid) residues on glycoconjugates and oligosaccharides found throughout the cell surface. The presence and distribution of these residues can not only vary among cell and organelle types but can also be expressed abnormally in various pathologies, making WGA a useful marker in identifying and profiling These phenotypes. WGA is water-soluble and, in solution, exists primarily as a heterodimer with a molecular weight of ∼38 kDa. Under physiological conditions, WGA is cationic (pl > 9) and unable to penetrate live cells. Cell and tissue samples must be fixed before staining with fluorescent WGA conjugates to detect intracellular glycoconjugates and oligosaccharides.

When succinylated with succinic anhydride, the solubility of WGA increases 100-fold at neutral pH and can agglutinate rabbit and human erythrocytes (A, B, and O blood types) with a minimum concentration of 2 µg/mL. Like unmodified WGA, succinylated WGA is specific for GlcNAc residues. However, it loses its binding affinity for sialic acid residues suggesting the use of both lectins as a system for distinguishing between N-acetylglucosaminylated and sialylated glycoconjugates.

Fluorescent WGA conjugates are commonly used in imaging and flow cytometry to localize and detect cell-surface or intracellular glycoconjugates. They are useful at identifying cell types based on glycoprotein-makeup and for labeling eukaryotic cell walls, fibrotic scar tissue, yeast bud scars, chitin and bacterial cell wall peptidoglycans. The latter has been used to differentiate gram-positive and gram-negative bacteria. 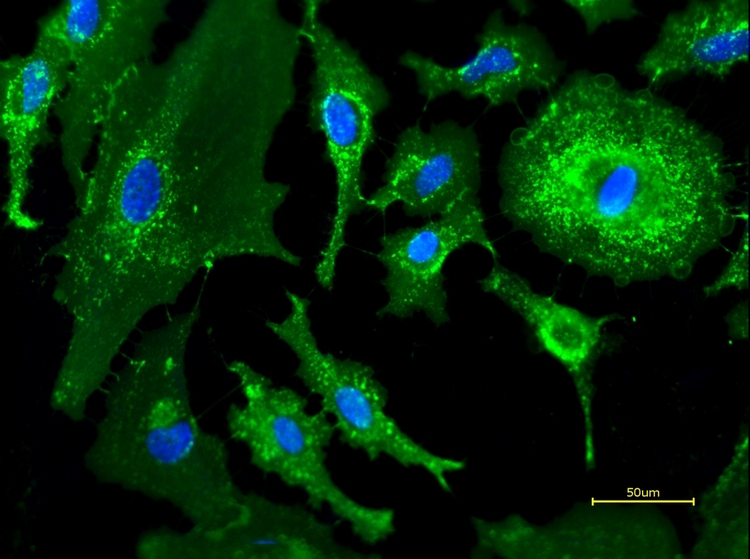 Live HeLa cells were stained with iFluor® 488-Wheat Germ Agglutinin (WGA) Conjugate at 5 µg/mL for 30 minutes followed by Hoechst 33342 (Cat No. 17535). Image was acquired using fluorescence microscopy using FITC and DAPI filter set.
AAT Bioquest offers iFluor®-WGA conjugates in four distinct fluorescence colors, in particular our green-fluorescent iFluor® 488, red-fluorescent iFluor® 594, and far-red fluorescent iFluor® 647-WGA conjugates. These conjugates have nearly identical spectra to their respective FITC, Texas Red, and Cy5 counterparts, but provide significantly brighter more photostable fluorescence signals over a broader pH range (pH 4 to 10). The longer-wavelength iFluor® 647-WGA conjugate, which emits maximally at 670 nm, offers significant advantages in multicolor imaging or when working with samples known to have high intrinsic autofluorescence, such as tissues. The fluorescence emission of iFluor® 647 is well-separated from that of other commonly used blue- and green-fluorescent dyes, eliminating the need for compensation. Also, available are two WGA conjugates labeled with our Alexa Fluor® 488 equivalent XFD488 and Alexa Fluor® 594 equivalent XFD 594 dyes. Both the XFD488 and XFD594 dyes have the exact same chemical structure as Alexa Fluor® 488 and Alexa Fluor® 594.