What is annexin V?

Annexin V (annexin A5) is one of the cellular proteins in the annexin family, a group of proteins that bind to anionic phospholipids in a Ca2+ dependent process. Its function within the cell is unclear, although mechanisms indicate it is mainly involved in coagulation processes. In cell health analysis, annexin V is regularly used to identify apoptotic cells by binding explicitly to phosphatidylserine (PS). PS is a protein that resides on the inner leaflet of the plasma membrane until the apoptotic process begins, whereby it translocates to the outer leaflet. Conjugates of annexin V are usually labeled with fluorophores, phycobiliproteins, or hapten molecules (e.g., biotin) to facilitate detection and quantification. (2)

Figure 1. Annexin V conjugates identify cells in the early stages of apoptosis by binding to PS residues that have translocated to the outer leaflet of the plasma membrane.

How does annexin V detect apoptosis?

Figure 2. Annexin V-FITC (Cat No. 20030) was used to identify levels of apoptosis in HeLa cells. HeLa cells were treated with low concentrations of EtOH to induce apoptosis and then stained with annexin V-FITC. The green label on the plasma membrane (Annexin V-FITC) indicates cells undergoing apoptosis.

Yes, annexin V can stain necrotic cells. Necrosis is the term for unnatural cell death and can be triggered by various events, including lack of blood and oxygen to tissues or acute trauma to a cellular area. One key characteristic of necrotic cells is the rupturing of the plasma membrane. This event allows annexin V to access the entire plasma membrane, including the inner leaflet where PS residues reside, resulting in false positives. Therefore, it is recommended to use a cell impermeant stain, such as propidium iodide (PI) or 7-AAD, in combination with annexin V conjugates to negate false positives and differentiate apoptotic cells from dead ones. (1), (7)

What is an annexin V/PI assay?

An annexin V/PI assay is used to differentiate cells in the early stages of apoptosis via annexin V labeling from necrotic/dead cells via propidium iodide (PI) labeling. In the early stages of apoptosis, the cell membrane begins to lose asymmetry, which leads to the translocation of phosphatidylserine (PS) to the membrane's outer surface, where annexin V conjugates can detect it. However, in cases where the cellular membrane has ruptured, such as necrosis, annexin V conjugates can access and bind to PS residues in the inner leaflet, resulting in false positives. Therefore, using a membrane-impermeant nuclear stain, such as PI, with annexin V conjugates is recommended. This allows the user to distinguish between cells in early apoptosis (annexin V stained), late apoptosis (annexin V and PI stained), and necrotic cells (PI only). (5)

Figure 4. Diagram of an annexin V and PI assay.

Can you fix cells after annexin V staining? 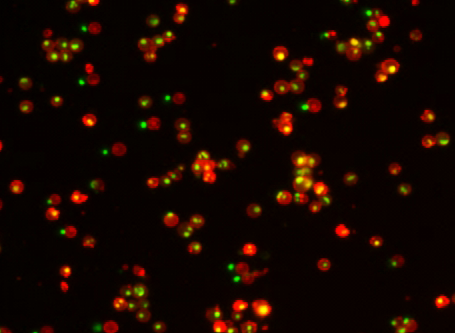 Is annexin V an antibody?

No, annexin V is not an antibody. Annexin V is a 36.8 kDa calcium-dependent cellular protein that binds selectively to the anionic phospholipid phosphatidylserine (PS) in a calcium-dependent manner. While its function within the cells is not entirely clear, it is believed to be involved in coagulation or clotting mechanisms of the body. In cell health analysis, annexin V staining is used to detect apoptotic cells.

Anti-annexin V antibodies are used to detect the presence of annexin V proteins in applications such as Western Blot, ICC, IHC, flow cytometry, or ELISA. They are typically conjugated to enzymes, fluorophores, phycobiliproteins, or hapten molecules to facilitate detection. (6)

What does annexin V positive mean?

An annexin V positive result indicates cells that are in the early stages of apoptosis. This term is usually used in the context of an annexin V/PI assay to differentiate cell populations based on their health status. Other terms include:

What is an annexin V binding buffer?

An annexin V binding buffer can be made using the following recipe:

What color is annexin V?

By itslef, annexin V is colorless and difficult to measure. To detect the binding of annexin V to phosphatidylserine, annexin V is usually conjugated to fluorescein isothiocyanate (FITC), a green fluorescent compound featuring an excitation peak of 491 nm and an emission peak of 516 nm. Labeling annexin V with FITC or any other green fluorescent dye, such as iFluor® 488 (Ex/Em = 491/516 nm), facilitates multiplex analysis with red and far-red fluorescent probes, with little compensation. One example is the popular red-fluorescent dead cell stain propidium iodide (PI) which has an emission maximum at 618 nm. Together Annexin V-FITC and PI can be used to differentiate between apoptotic populations from necrotic populations in complex samples. (2), (8)

How does annexin V work?

Annexin V identifies cells undergoing apoptosis by binding to phosphatidylserine (PS) residues exposed on the extracellular side of their plasma membranes. In live healthy cells, PS residues reside within the inner leaflet of the plasma membrane, where they are inaccessible to annexin V binding. As cells initiate programmed cell death (apoptosis), their plasma membranes lose asymmetry. PS residues translocate from the inner to the outer leaflet of the membrane, where they become accessible to annexin V binding. Annexin V is typically conjugated with a fluorophore, such as FITC to facilitate the detection of apoptotic cells. (7)

What is annexin V positive control?

An annexin V positive control is cells induced to undergo apoptosis using a known apoptosis induction method. When stained with an annexin V conjugate (e.g., Annexin V-FITC), these cells will produce a positive signal. For example, apoptosis can be induced by heating cells at 55 °C for 20 minutes or treating cells agents known to induce apoptosis, such as camptothecin or staurosporine. (7) 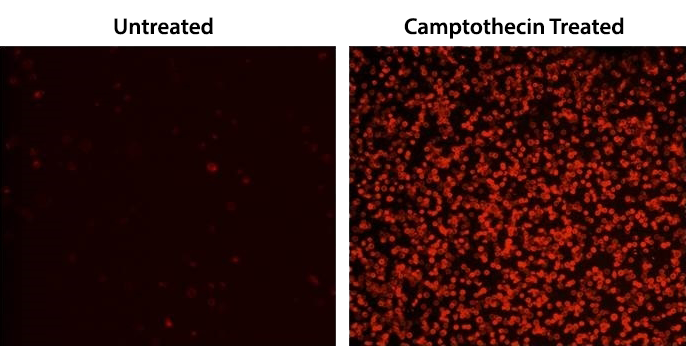 What is the difference between annexin V and TUNEL?

Annexin V staining identifies cells in the early stages of apoptosis by binding to extracellularly exposed PS residues due to loss of cell membrane asymmetry. Annexin V is typically labeled with fluorophores such as FITC to facilitate the detection of apoptotic cells. (3)